Some Additions to the 2015 Penguin Road Racing School Schedule


Before you register, consider the Learn to Fly Membership Programs -
Registration for all events is OPENClick the links below to get to the registration page for your desired date
2015 Partner Events
with Team Pro MotionThese are track day events with Team Pro Motion that all Penguin Learn to Fly Members have access to at special rates for 2015.  Details coming soon
If you need to access the cancellation form, please click here

Kawasaki Ready to Ride ProgramWhen you purchase a new 2015 Kawasaki sport bike from a New England area dealer, you get a free trip to a Penguin Track Experience class.  New Kawasaki owners can access this form by CLICKING HERE

LRRS FRIDAY PRACTICEAll Friday schools at NHMS are followed by a Sat/Sun LRRS race event.  All these Friday schools (plus Thursday 6/18) have a racer practice open to all licensed riders.  There is a Learn to Fly Practice pass program for racer practice in 2015, DETAILS HERE.
Posted by Penguin Road Racing School at 8:49 AM No comments:


Penguin Racing / Woodcraft Technology's Eric Wood ran the 12015 Daytona 200 with a little help from some Friends.

Nordica and First Trax Sports Shop donated 2 sets of Nordica skis complete with bindings and boots to raffle off to benefit the Daytona event!
Here is the list of our winners from that raffle. We really appreciate all who helped out in this adventure.

We have also been attending some Motorcycle trade shows over the winter and below is also listed the winner of a track day pulled from the list of names collected at those events. 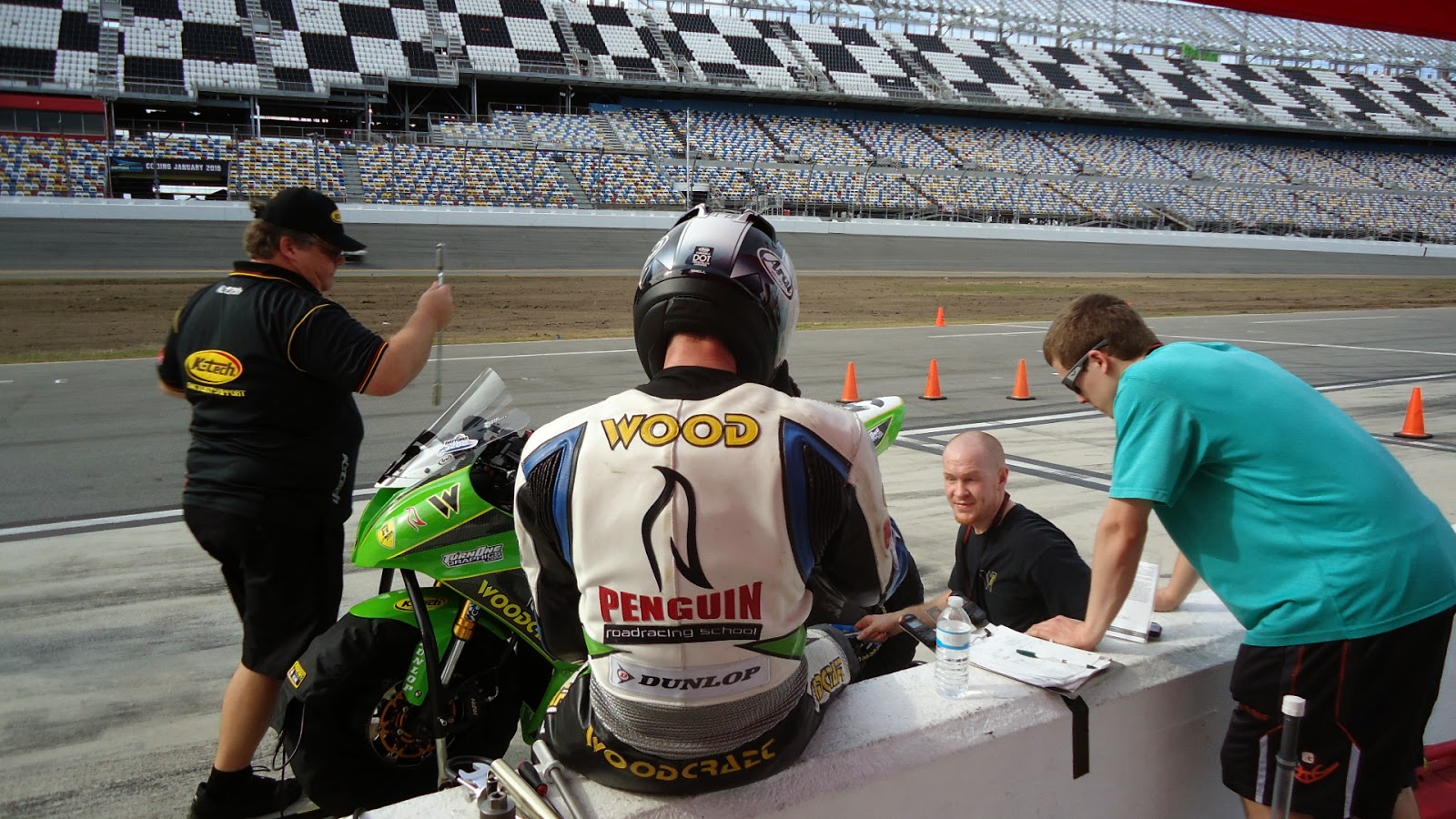 Motors Built and Maintained by http://vanwaylonmotorsports.com

Posted by Penguin Road Racing School at 8:29 AM No comments: 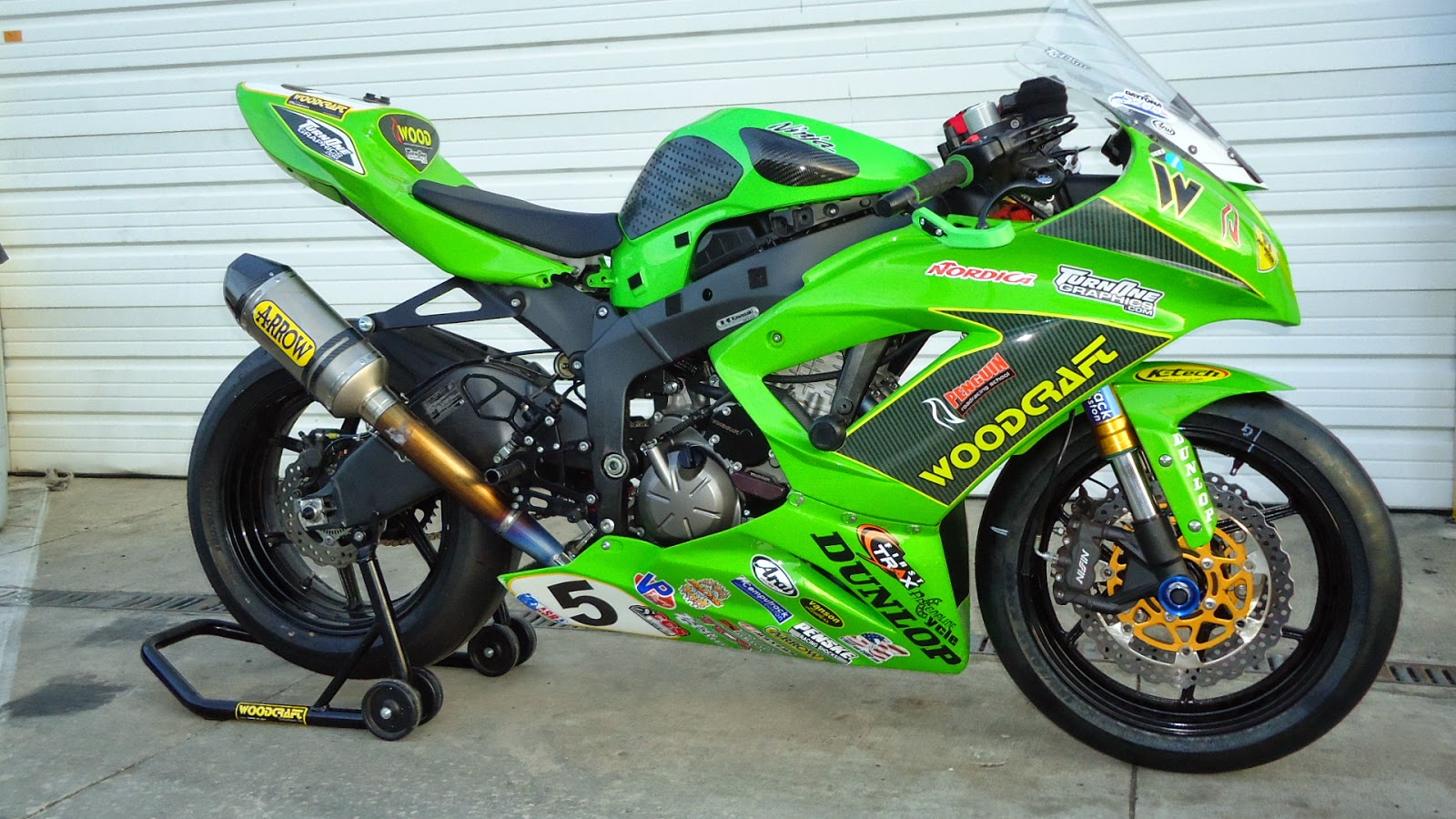 The 74th Daytona 200 was quite an eventful race for everyone involved.  The Woodcraft/Penguin Racing Kawasaki ZX636 worked very well during the course of the weekend, and we have a lot of people to thank for contributing to the effort in many different ways.

The team sorted through some typical Daytona issues early in the weekend, and the bike really started to come around on Friday afternoon before qualifying.  Our bike had the fastest trap speed of all the Kawasaki’s during the qualifying session, and after Q1 we found ourselves in 5th place.  We then went out in qualifying session two and put in some good laps on a race tire and then put on a soft qualifier to try to better our times, but we pushed a little too hard in a couple places and could only match our race tire pace. 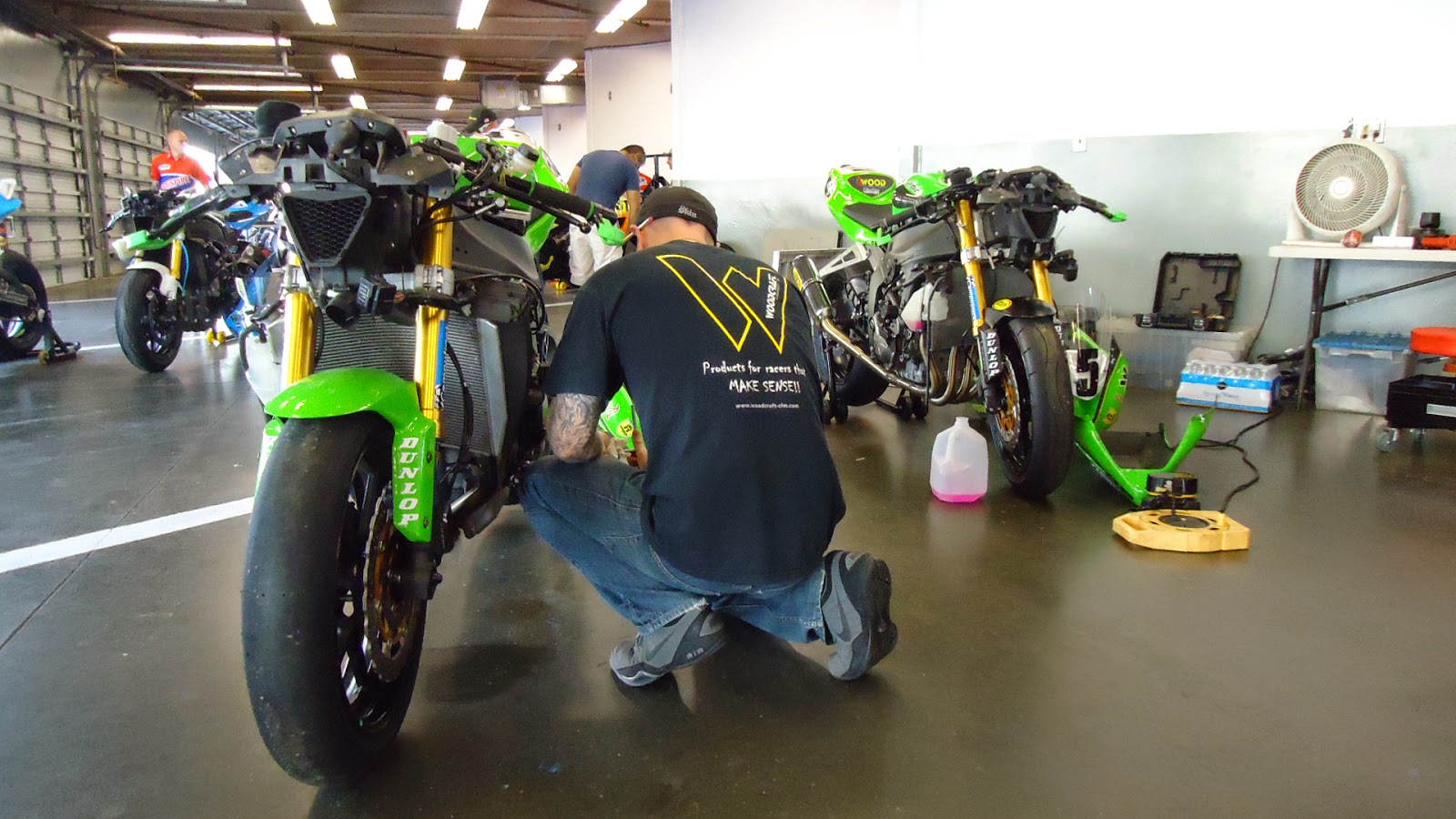 Starting from the third row we had a great chance to run with the lead pack.  We had a good restart after the first of 4 red flags during the day brought us back into the pits before the first lap was completed.  The pace was fast up front and I watched a ton a positions swapping around in the first few laps.  With Daytona being such a long race, our strategy was just to make sure that we hung onto the lead draft and stayed within a few seconds of the leaders until the first round of pit stops.  We ran our fastest lap of the race (1:51.9) on lap nine as we made a push to stay with the leaders.  When the lead pack caught the first group of lapped riders it was crazy!  That served as a separator and broke the pack up a bit.  As the first round of pit stops was approaching, a red flag halted the action. 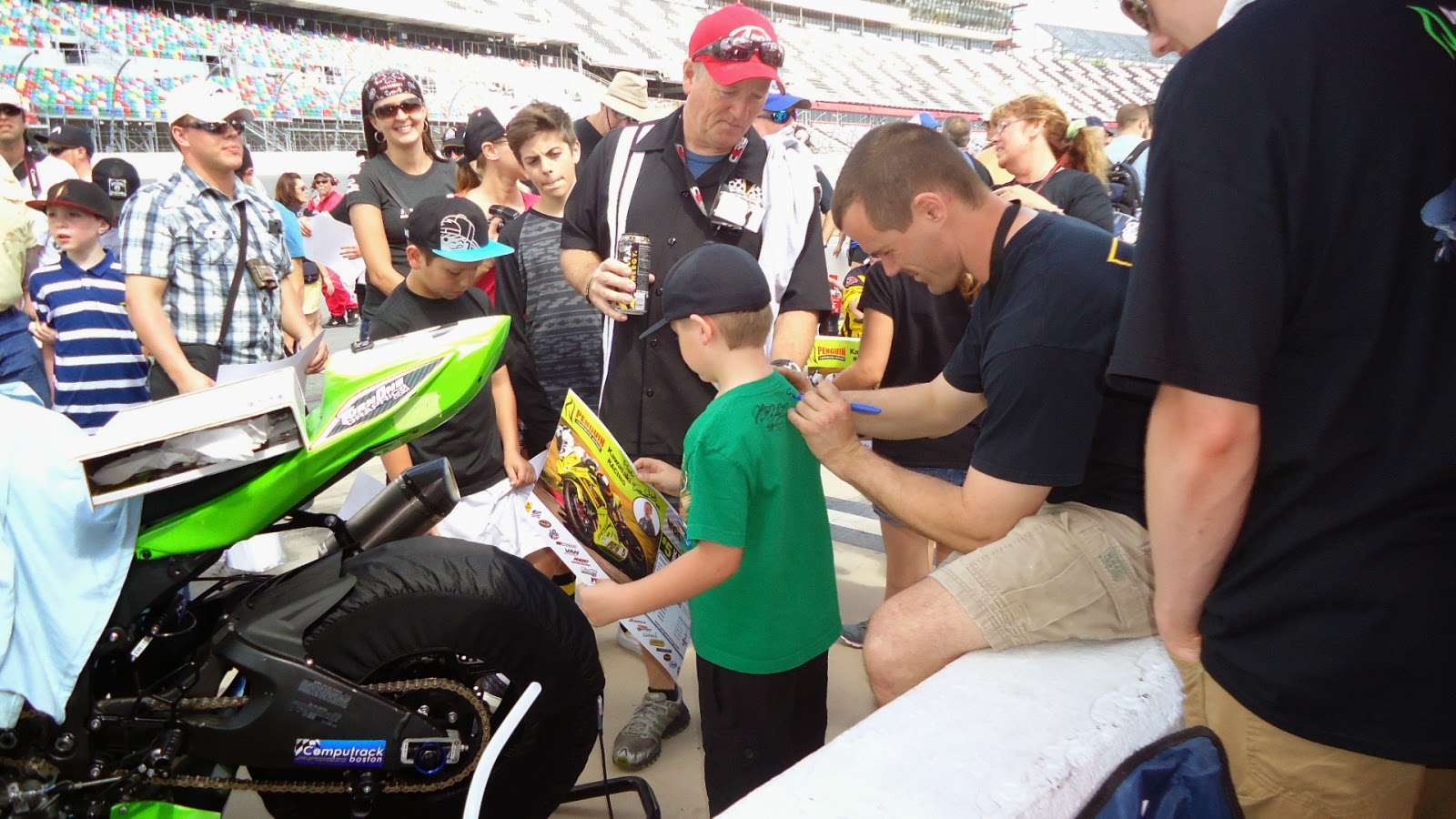 We got a good start to begin lap 20, and ran again until a third red flag halted the action 11 laps later.  This would alter the pit stop strategy for everyone in the field.  Our plan was to run as long as we could on each tank to avoid losing track positions on another red flag.  We were running with the lead pack and looking to pass eventual 4th place finisher Bostjan Skubic, but when we were forced to tighten our entry entering turn 6 we lost the front and crashed into the air-fence at about 60MPH.  Luckily, I was unhurt but the bars bent to the point where I only had a couple degrees of steering movement, and it looked like our race was over.  Luckily, the 4th red flag of the race came out a few minutes later, and I thought that we might be able to get back into the race.  We managed to limp the bike back into the pits and my fantastic crew pulled parts from my spare bike and managed to secure a few parts back together with zip ties and duct tape.

The final start went smoothly and we were right up front, and when I looked up at the leader board I realized that we were a lap down and in 18th place.  Our fight was to get back as many positions as possible, and with the help of a fantastic final pit stop we were able to get back up to 12th place in the final 26 laps. 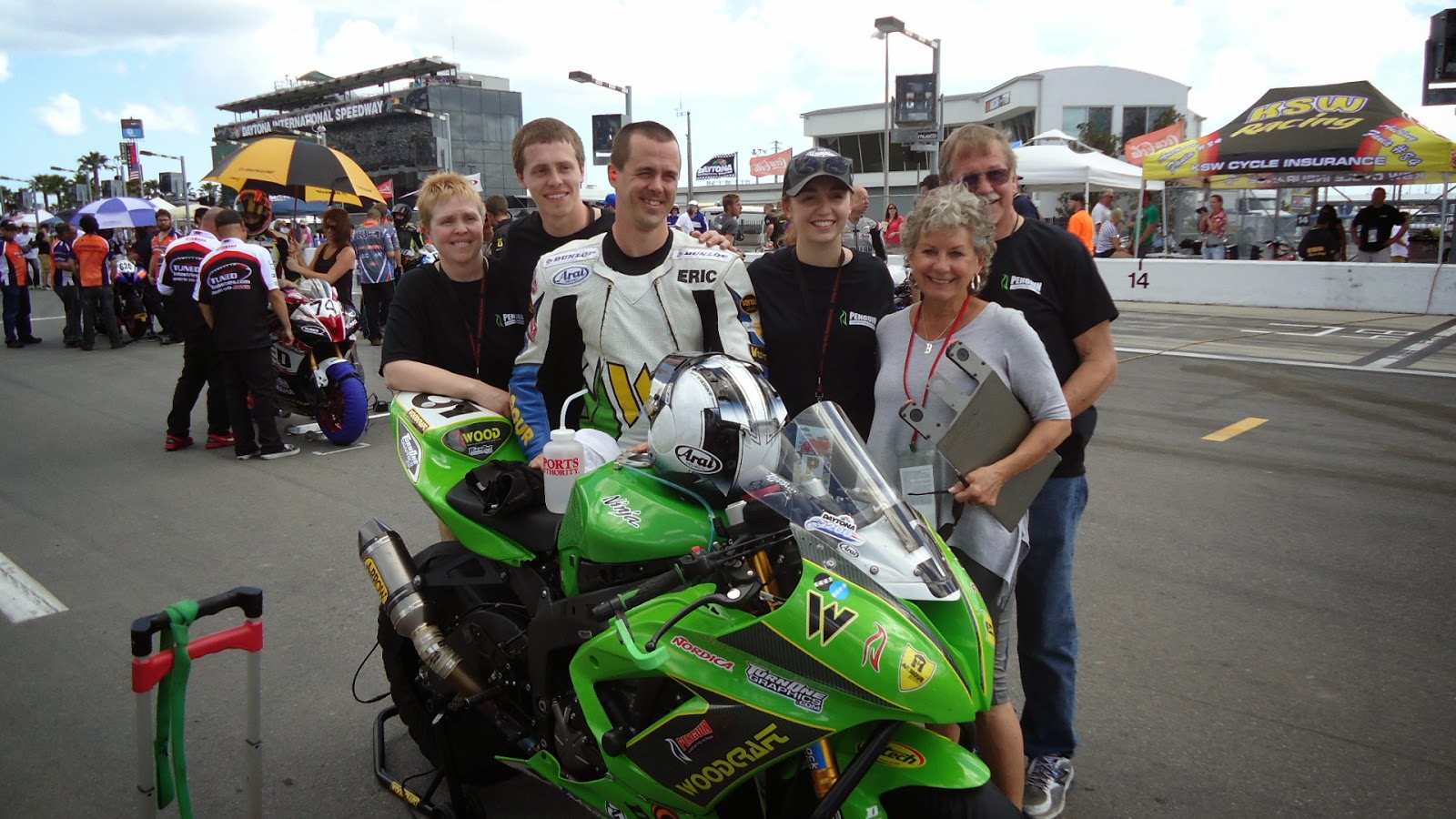 Many thanks for the help we got from so many people for this event.  First and foremost, I need to thank my crew members who came down to help during this race.  I am especially thankful for my wife Margo for all her support, son Austin who was in charge of the fuel, and daughter Amanda who ran the towel and drinks during pit stops.  Wheel changes and lots of work in the pits all weekend long were run by Waylon Dempsey (who also built me great motors), Chris Holske, and Steve Aspland.  Jerry Wood manned the extinguisher and ran pit stop inspections, Dee Wood kept a detailed race chart, Jerri Boatman ran our pit board, and Joanna Piepiora was ready and willing to help with anything that was needed.

Nordica and First Trax Sport Shop put together a raffle for some top shelf ski gear, and we owe both them and all the people who supported us by buying tickets a big vote of thanks!  We got support from a bunch of great companies to put together our Kawasaki 636’s.  Woodcraft, Penguin Racing, Kawasaki, Armour Bodies bodywork, Dunlop tires, Maxima Oils, Vanson leathers, Arai helmets, TCX boots, Held gloves, Penske shocks, GMD Boston, Arrow exhaust, Street & Competition, Bazzaz, VP fuels, Van Waylon engines, Robs Dyno, Zero Gravity windscreens, Turn One graphics, Speedcell batteries, Vesrah brakes and K Tech forks.  I also want to thank Justin from Adrenaline Cycles for fantastic work on a dry break fuel tank, Jason Farrell for help with some spare parts and for being a perfect drafting partner and Jeff Maloney from GP tech for lending us a top shelf quick fill fuel tank.  Finally, I want to thank all the supporters we had cheering us on both at the track and at home.  We are very fortunate to be part of a great family of racers who support each other in this sport we all love.

Motors Built and Maintained by
http://vanwaylonmotorsports.com
Posted by Penguin Road Racing School at 1:28 PM No comments:

CLICK HERE for more information
Woodcraft frame sliders stand out in a market crowded with look-alike options. Our patented design features a universal slider puck that fits nearly all slider models. What makes the Woodcraft design unique is the perpendicular attachment bolt for the puck. Because we do not have to hollow out the center of the puck, we can leave the sliding surface of the puck solid. This provides 48% more plastic to slide on, dramatically improving puck life. The side mount also eliminates the hassle of trying to dig out a puck replacement bolt through a distorted hole.

"Being in the frame alignment business, we see a lot of frame sliders that do more damage then they prevent. Woodcraft Frame Sliders are designed to protect the frame without causing unnecessary damage to the mounting points. We won't sell any other brand" - Peter Kates GMD Computrack Boston

Posted by Penguin Road Racing School at 8:46 AM No comments:

Penguin Road Racing School
The Penguin Roadracing School, now in it's 41st year is The Oldest Motorcycle Roadracing School in the Country. We are dedicated to helping the new rider learn the basic skills necessary for a successful racing career, as well as tutoring the experienced racer who needs the competitive edge to get to the front of the pack. We also welcome the street riding enthusiast who would like to improve their everyday riding skills and experience the race track in a non-racing environment. www.penguinracing.com